We asked Evan’s family “What does AAC mean to Evan and your family?”

This is what they responded with…

Just before Evan turned 4 years old we started out with our AAC using Proloquo2go. Before that we had used PECS for awhile. While PECS are a great way to communicate we wanted Evan to be able to say whatever he wanted to say and us be able to hear even while we are driving or unable to see what symbol he is pointing too.

Using AAC has given Evan another way to communicate, share his thoughts, and express his needs and wants. Something so important for everyone. Imagine going through life not being able to say what you want to eat, play, do or how you feel?

Over the years we have customised and added words to Evan’s talker that he wants on there. We have also invested in helping his teachers and learning support staff to use his AAC in his learning. Sometimes I add new words daily- weekly as we find things he needs to be able to say.  This is his voice so making sure it has what he wants and needs to say in it are important. 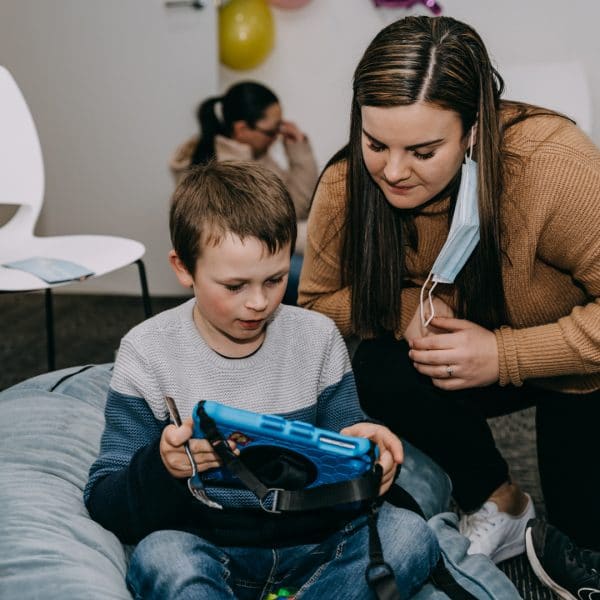 Without having an AAC it would be hard for Evan to tell us who he wants to play with/ talk to, things about his day and so much more. It really is part of his voice and communication. He also does use some verbal words and a lot of gestures/ body language. All of these make up his own communication style.

AAC has given Evan and us as a family another amazing tool for communication.

AAC gives him ability to choose what he wants to watch, eat, talk to play with etc. it helps engage in conversations with his family and friends.

He takes it everywhere with him ( school, shops, playgrounds and even to the snow!) it is a part of him.

We want him to be able to say what he wants to who he wants and when he wants as it’s everyone’s right to be heard. We are so glad AAC gives him this ability.

Thank you so much for sharing your story with us. We truly love seeing Evan smash his goals and communicate his personality so well.

Our sessions are always fun – just like this one where we are completing a puzzle (something Evan is very good at!)

Looking to Make an Appointment?

We are here to help! Booking Online is the most convenient way to lock in the practitioner & time you want.